A Day of fun AND excitement 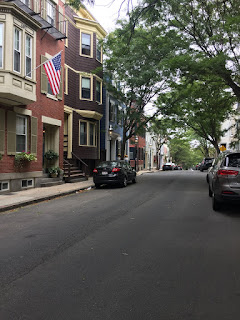 We started our day with a walk through the neighborhoods of Boston headed to the Freedom Trail, a brick marked path that takes you by all the historic places in Boston. We ended up at the USS Constitution which is in dry dock getting needed repairs. From there we caught the City View Hop On Hop Off bus and had a very entertaining driver with a wonderful Boston accent and sarcastic sense of humor. We rode with him until he kicked us all of his bus at stop #1 The Long Wharf.
We found a wonderful restaurant, Granary Tavern, just across the street. Sue had a craft beer, soup, and the most wonderful Bang Bang Cauliflower, a fried cauliflower with sweet and spicy chili sauce. I had seafood chowder and calamari with chorizo which was also very good.
Then the excitement of the afternoon began! 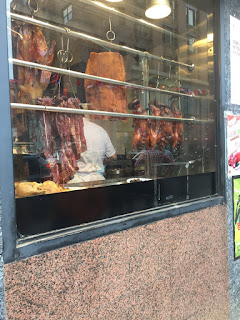 We got back on the tour bus with the intention of getting off at Chinatown to look around and for me to look for a set of Mahjong tiles. We had to walk some to go from the bus stop to actually get to Chinatown. I managed to get us lost twice while using the maps on the iPhone. I think it will be a while before Sue lets me be the leader. We did eventually find Chinatown, we could tell by the ducks and chickens hanging in the window and all the Chinese writing on the buildings. I went into the first gift shop I saw, again Sue was reluctant to follow me into as we had to go down a creepy spiral staircase to get there. Low and behold he had a set of tiles for $25,  half price from Amazon or any other place I looked. After the purchase I found out why they are so cheap, all the tiles are chinese symbols, no english anywhere.
Next we decided to treat ourselves and have an ice cream puff, a wonderful sugary dessert. We left there and decided we would start to walk home and try and beat the rain. We stopped in a wine shop to take some wine home to our hosts. When we went to pay, Sue discovered her wallet was missing!!! OMG, had she been pick pocketed? All her credit cards, drivers license and money were in her wallet. We took some time to breathe, Sue remembered the name of the ice cream shop we had just been at, called them, and yes they had her wallet, she had left it on the counter when we sat down to eat. We high tailed it back and was so relieved to get all her credit cards, drivers license and money in her hands again.
By this time it was raining full bore so we got an uber car to take us home

Akwalker
I am passionate about traveling, off the beaten path in Europe is my first choice, but really anywhere will do. I also love learning which is something traveling feeds. I was born and raised in Alaska but now am fortunate enough to spend winters in California out of the cold. Blogging allows family and friends to travel with me, and preserves my memories in writing.